Home » Biologic and Biosimilar Medicines: Their...

Biologic and Biosimilar Medicines: Their Purpose, Development, Structure, and Effects 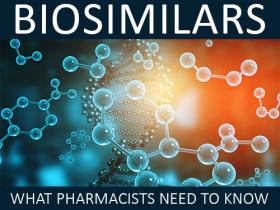 Biologic and Biosimilar Medicines: Their Purpose, Development, Structure, and Effects

FDA-approved biosimilars have been compared to an FDA-approved biologic, known as the reference product. Learn about these new drugs in the first of a multi part series.

This is the first in a series presented on this emerging topic of BIOSIMILARS.

After registration, watch the video then complete the evaluation and the quiz to claim credit.

At the completion of the activity, the participant will be able to:

1. Describe the basic science and manufacturing of biologic medicines.

2. Define biosimilars and explore how they differ from generic drugs for purposes of patient care, pharmacovigilance, and pharmacy practice.

Philip Schneider is Advisory Board Chair of the Alliance for Safe Biologic Medicines. He is professor of pharmacy at Ohio State University College of Pharmacy, where he previously directed the Pharmacy Residency program and led an interprofessional program to improve the medication use system to reduce adverse drug events.

He is a past president of the American Society of Health-System Pharmacists (ASHP) and has served as Chairman of the Board of Pharmaceutical Practice of the International Pharmaceutical Federation (FIP).

In 2008, he received the Harvey A.K Whitney award, known as health- system pharmacy’s highest honor, for his outstanding contributions to the practice of pharmacy in health systems.

Cost:
$10.00
Please login or register to take this course.

You will need a device that allows you to hear and see the presentation. Some phones may have limited functionality.